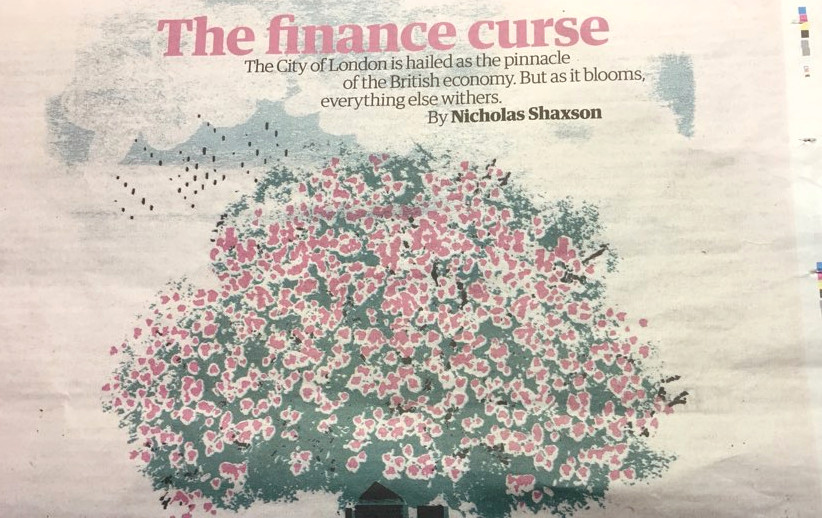 There was a brilliant article in The Guardian on Friday, by Nicholas Shaxson, called “The Finance Curse’, which explains how the dominance of finance in our economy is harmful and needs to be addessed.

Shaxson is a very good writer who, like John Lanchester, has taken a diffcult topic and sought to get to grips with it in a way that an intelligent lay person can understand.

However, the problem with articles like this is that they are unlikely to get as wide a readership as they warrant, because the content is seen as offputting or too hard to comprehend for too many people. People who still think that matters like the role of the City in our economy, or the way the tax system works to facilitate industrial scale tax avoidance, is just not of concern to them, or of relevance to them, in their daily lives: how wrong, how terribly wrong they are.

There is hardly an aspect of our daily lives that is not profoundly affected by the activities of banks or other financial institutions. Yet so few of us have a clue about what these organisations really are, or how they work, or who owns them, or very much else besides.

Our unquestioning approach to finance

There is a curious kind of acceptance, a sort of unquestioning belief that most people have, that says the way things are is akin to an act of God: immutable, unchangeable and the natural order of things.

There is a huge deluge of propaganda that exists – in all sorts of ways – to reinforce and copperfasten those feelings of helpless resignation. It is best summed up in the notion that ‘things are as they are because there is no other way’, and like a lot of sayings of that kind, it is a diversion from the truth.

The way our economy works and all that flows from it has nothing to do with any divine power, it is an entirely man-made construct and the baffling thing about it is just how few of us have a clue about how it all works. This despite the fact that its operations determine how we live our lives; the more one thinks about it, the odder it all seems.

If the population understood the basic structures of the economy – what finance really is and does, how the big institutions work, what the underlying concepts of things like credit and interest actually mean, what the tax system is for, why companies are limited, what is the role of the government, what is the stock market etc, etc – there would be a very different national discussion about every aspect of how we manage our affairs to the greatest possible mutual benefit of us all.

When millions of people sit down and watch the news on their TV, how many of them have the slightest notion of what the newsreader is talking about when they are told (in suitably sonourous tones) that the FTSE 100 is up or down?  Or that Standard & Poors have downgraded the UK’s credit rating?  Or the costs of PFI are coming under closer scrutiny? Or the Bank of England’s Monetary Policy Committee is examining the case for raising basic bank rate?  Or that GDP could be at threat from a no-deal Brexit?

The language is deliberately off-putting to the casual listener – it all sounds like technogobbledygook – and I dont believe there is one listener in ten thousand who really understands how it all fits together and why it matters.

How could such ignorance be allowed to exist? When everything that newsreader talked about will affect every viewer’s income, savings, pensions, mortgages, rent, credit card payments, food costs, transport costs, job security, health and well being, for the whole of their lives, and the lives of their children and grandchildren?

The rules of the game

Thankfully there is a growing number of talented writers who are trying to get the rest of us to understand how the world we live in actually works. It is a long, tough haul…but it shouldn’t be like that.

The problem is that, in explaining the consequences of the way our economy is structured, they have to wade through to the simplest common demoninator because of the gross and widespread ignorance that most of us suffer from when anything to do with the economy comes along.

It is like a journalist writing a report on a football match, who has to spend most of his time and all his energy on explaining some rudimentary facts to his readers, long before he can get to any serious analysis of the tactics of the game: the ball is round, the pitch has markings on it, the goals are at either end of the pitch, there are 11 players in each team, the team that scores most goals wins the contest, the match lasts for 90 minutes, and so on.

It would reduce sports reporting to a noddy level, until someone decided that the way to solve the problem would be to explain the rules to the public. After that, a more interesting and stimulating match analysis could be understood by all.

One of the points Saxson makes in his article, is the way certain important things change without any of us really noticing: banking – something we all have to engage with – is a good example.

That is one of the main causes of inflated property bubbles that wreck economies. Yet how many of us have even a vague understanding of the forces that bring such calamities into all out lives? It is our bank, our pension provider, our insurer, all of whose actions we fund, but don’t understand.

It is time we found an attractive, simple, and compelling way of explaining the rules of the game to its millions of put-upon participants.